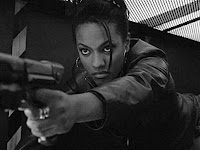 Over the past three months or so, I've become obsessed with Dr. Who, watching the first four seasons of the modern version (2005-2008) plus the 2009 specials, bringing me through the end of the David Tennant era. I find it fascinating on a lot of levels, and you'll probably see several Dr. Who related posts in the upcoming months. The show deals with some of the major questions that the West is struggling through, particularly ethical questions related to justice. Today I thought I'd start by asking and attempting an answer that the show asks repeatedly. More than one villain  asks what happens to his companion(s) that she/they become soldiers.[1] This does not happen to all of the Doctor's female companions. Donna Noble certainly wasn't a soldier after her time with the Doctor, and even had the end of her time with the Doctor not resulted in her losing all memory of contact with him, there were no signs that she was on the way to becoming one.[2]

Both Martha Jones and Rose Tyler become soldiers after the end of their time with the Doctor, and in the case of Martha, at least, he somewhat disapproves.[3] We find out midway through season four that Martha joined UNIT as a doctor. UNIT (at least in the modern series) is a heavily militaristic institution that helps protect Earth from Aliens. Martha and the Doctor have a dialogue about whether or not the Doctor is responsible for her fate. The Doctor disavows responsibility, but is he correct?

Analysis here is rather difficult, but I believe we can outline some observations that allow us to explore the question and will provide some framework for examining Rose's transformation in a later post. First, is that during her season, Martha is involved in significantly less fighting than either Rose or Donna. In the Sontaran Stratagem she blames her outcome based on her experiences with the Doctor. There's a sense in which she's right, and a sense in which she's wrong.

Martha does become keenly aware of how bad things can get. Her experience with the Daleks and in the three part conclusion of the season involving the Master she sees just how fragile the human situation is. In particular her battle against the Master is far more difficult than anything Rose or Donna ever faced because it dragged on for years. Martha had to give a completely defeated humanity hope.

Her experiences put fear in Martha. What if the Doctor is ever unable to help? One common theme in Dr. Who is the human will to survive at any cost. That desire is strong in Martha, and perhaps the Doctor shouldn't have traveled with her for that reason. During the David Tennant era, travelling with Martha is one of the three biggest mistakes he makes, even though she was clearly the most capable assistant of the three (we'll examine the other two at a later date). There's nothing else that experience could have produced in her.  So in a sense, the Doctor is to blame, he should have known better.

At the same time, she fails to learn a critical lesson, the lesson of non-violent resistance. Seven out of nine episodes have a non-violent resolution.[4] Even in one of the two that do, The Family of Blood, the Doctor attempted a non-violent solution (hiding). In particular, the experience that hardened her most, her defeat of the Master, should have shown her how much can be accomplished without taking arms. She did not learn that lesson. Perhaps that evolutionary urge to survive was too strong to overcome.

One wonders too, if she would have turned out differently had she not been slighted repeatedly throughout the season. The Doctor, Captain Jack, and even some of the villains compare her to Rose and find her wanting. One must wonder if the Doctor had been more supportive would she have felt so on her own when returning to life on earth. Would she have had more trust in the Doctor and turned out more like Sarah Jane Smith?

[2] We should note, though, that there really wasn't any sign of Rose Tyler becoming a soldier until the very end of season one, and there the signs are faint. Donna, though, was more strongly opposed than Rose was to the use of violence, and was more consistently compassionate than season one Rose. Though we'll never know, it's hard to imagine her becoming a soldier.

[3] The Doctor is visibly uncomfortable when Donna charges him with turning Martha into a soldier. He's also a little testy initially in his dialogue with Martha about her role in UNIT. You can tell that he's not totally on board with her decision to work for them.

[4] Granted it's impossible to see how Gridlock could have had a violent solution.

Popular posts from this blog

November 22, 2010
15 Brothers and sisters, let me take an example from everyday life. Just as no one can set aside or add to a human covenant that has been duly established, so it is in this case. 16 The promises were spoken to Abraham and to his seed. Scripture does not say “and to seeds,” meaning many people, but “and to your seed,” meaning one person, who is Christ. 17 What I mean is this: The law, introduced 430 years later, does not set aside the covenant previously established by God and thus do away with the promise. 18 For if the inheritance depends on the law, then it no longer depends on the promise; but God in his grace gave it to Abraham through a promise. 19 Why, then, was the law given at all? It was added because of transgressions until the Seed to whom the promise referred had come. The law was given through angels and entrusted to a mediator. 20 A mediator, however, implies more than one party; but God is one. 21 Is the law, therefore, opposed to the promises of God? Absolutely not! Fo…
Post a Comment
Read more

November 03, 2010
When I write commentary reviews, one of my main goals is to assess how well the commentator hit the intended audience of the commentary and utilized the format of the commentary. This often necessitates cluttering up the post discussing issues of format. To eliminate that, I thought that I would make some general remarks about the format and audience of each of the series that appear in my reviews. Terms like liberal, conservative, etc. are not used pejoratively but simply as descriptors. Many of you are familiar with Jeremy Pierce's commentary series overview. If you don't see a particular series covered here, check out his post to see if it's reviewed there. I am making no attempt at covering every series, just the series that I use. Additionally, new series (such as the NCCS) have been started in the five years since he wrote his very helpful guide, so I thought that it might not be completely out of order to have another person tackle commentary series overviews. This…
Post a Comment
Read more

Dating Galatians and Harmonization with Acts

April 26, 2010
We've gotten to the point where how we date Galatians and where we fit it into the narrative of Acts will affect our interpretation in a significant manner. The first question that we have to address is, which visit to Jerusalem is Paul recounting in Galatians 2:1-10? Is it the famine relief visit of Acts 11:27-30 or the Jerusalem council of Acts 15? First, I think it's worthwhile to point out that it's not all that obvious. Scholars are divided on this issue (even Evangelical scholars).

In favor of the theory of Galatians 2:1-10 referring to the Acts 11 visit are the following:
This visit clearly is prompted by a revelation by the Holy Spirit.The Acts 15 gathering seems to be a public gathering, where the one described in Galatians is private.Paul never alludes to a letter sent to the diaspora churches which could have definitively won the case for him.The issue of food laws was already decided by James. Why would men coming from him in Galatians 2:11-14 be advocating a vie…
19 comments
Read more